“Do you want to join us to see the waterfalls tomorrow?” the girls across the table asked.

And, just like that, I was heading off to Luang Prabang’s famous Kuang Si waterfalls with three girls I met at dinner.

Walk around Luang Prabang for more than two seconds and dozens of tuk-tuk drivers will ask if you want to go to the waterfalls.

And they mean only one: Kuang Si.

In a town of not much to do (which is a blessing), it’s the most popular attraction for travelers.

The waterfalls were listed in my guidebook as a “must-do,” and every traveler I spoke to before visiting the city told me I would be crazy not to see falls.

Normally, when so many people talk so enthusiastically about a place, I become skeptical. This is going to be a tourist trap, I think. It’s going to be one of those beautiful places so overwhelmed by crowds jostling for the perfect selfie, I won’t be able to escape for a moment of serenity.

But I love waterfalls immensely. They are incredibly soothing. 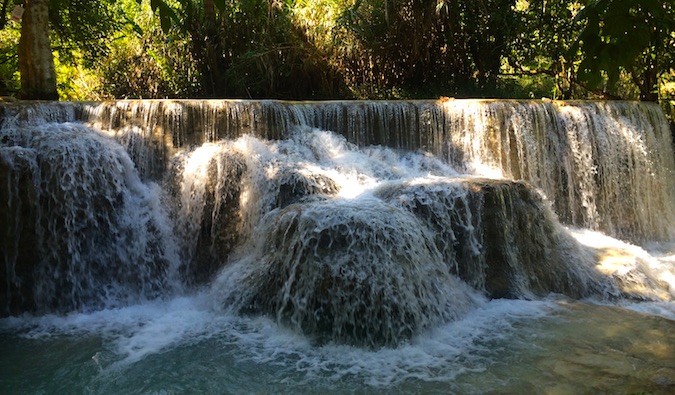 So after waking up early the next morning, I waited at the appropriate meeting spot for my new friends. As they were late, this gave me time to make arrangements with one of the many tuk-tuk drivers sitting around the main roundabout. One come up to me and we began our dance: we haggled, joked, threw up our arms in frustration, walked away, and then came to a price he feigned was too low and I knew was still slightly too high.

After my friends arrived, we boarded our shared taxi with a few other strangers and drove the hour outside town to the waterfalls. The air cooled as we passed through small, dusty towns, past schools where kids played and screamed outside, and beautiful Buddha statues, rice fields, and verdant mountains in the distance. It was my first real look at Laos since I landed the night before. There was a simple, unspoiled beauty to it.

After arriving and paying our 20,000 kip ($2.50 USD) entrance fee, we first stopped at the famous bear sanctuary. Asiatic black bears, or moon bears, are an endangered species, as their bile is used in Chinese medicine to “relieve internal heat” (it’s also prescribed for anything from hangovers to cancer and is found in common bath products). This sanctuary rescues them and houses 23 bears that are now allowed to roam and enjoy life outside a cage. It made me want a bear. They were so cute and furry. Just look: 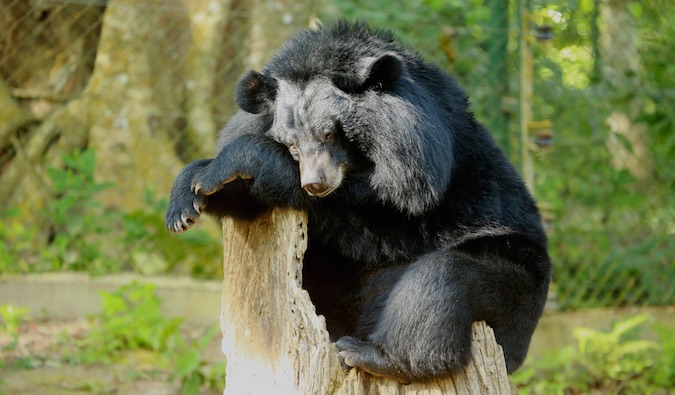 We watched them climb up and down trees, play with each other, and drink water. A collective “awwww” swept the onlookers every time a bear came into close view.

With the ogling over, we continued toward the waterfalls, eager for a swim.

Kuang Si is a giant waterfall that flows through limestone-rich jungle and empties out into a series of three gently cascading pools. From the lowest one, each pool seems like a step on your way up to a holy temple.

Legend has it that a wise old man summoned the water by digging into the earth. Then a golden deer made its home under a rock protruding from under the new waters. That’s where the name Kuang Si comes from: kuang means deer, and si means dig.

We started at the lowest pool and wandered toward the waterfall. As you walk through and around each pool, you feel as if you’ve found yourself in a fairy tale, with water flowing over white limestone rocks into aquamarine pools surrounded by tropical trees that let in just the right amount of light. The closer you get to the waterfall, the more groups of people I saw, swimming under the falls, walking on the rocks, and taking endless pictures. 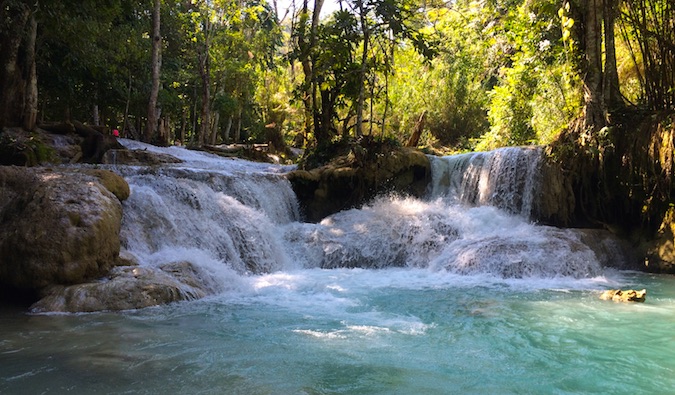 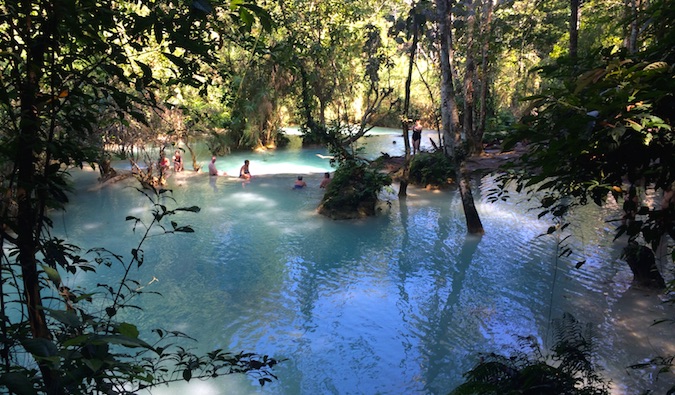 Gazing up through the crowds and silently cursing in hopes that they would get out of the photos I was trying to take, I couldn’t help but marvel at how beautiful the scene was. Everyone was right: this place was a must-see. Gazing at the blue-green water as it fell over the rocks’ edges, with the light casting an ethereal glow on the scene, the crowds and noise couldn’t take away from this place’s beauty.

“Should we go for a swim or hike some more?” I asked the girls.

We continued on, marveling at each pool until finally reaching the waterfall. As the water cascaded down in a torrent of sound, we gazed with dropped draws. What a beautiful site to behold! This waterfall cut through the jungle like a razor. I couldn’t get over how intense and wonderful it looked. 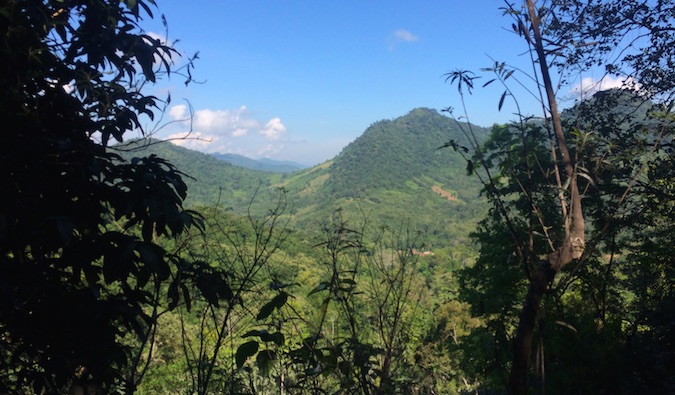 From the right side of the falls, we climbed a muddy, unkempt, worn trail that often required a bit of mountaineering skills. Our prize was the top and its spectacular views of the valley. We wandered around the top of the fenced-in waterfall, wading through pools and crossing rickety walkways. I was struck at how few people there were compared with below. Though the pools below were filled with people, barely a fraction of them came up to enjoy the view.

At the edge we took in the vast expanse of Laos. I let out an audible “wow.” I had no idea how green Laos was. We stood there and stared.

As we were about to descend, a friend of the girls came up and asked if they had found the entrance to the secret pool.

“What secret pool?” we asked in unison.

He told us that further down, along the path we’d climbed already, was a hidden entrance to a mid-level pool that was virtually empty. He hadn’t been able to spot it and wanted our help. The girls wanted to join, and though I hemmed and hawed (as I was hungry), I agreed, and we backtracked down the way we came to look for this hidden entrance.

As we descended, we spied what looked like another small path in the forest, blocked by a boarded and barbed-wire fence. It was a place we clearly didn’t belong, but there was also a hole that beckoned us onward. This must be it, we thought.

We climbed through first one barrier and then another to walk along a path. Within in a minute, we came to the secret pool. Before me was an aquamarine basin below a cascading waterfall lit up with the setting sun of the day. Rays of light eked through dense trees and created an even more fairy-like environment than the one below. Surrounded by jungle, it was like we had the world to ourselves. No touts, no crowds, no one taking pictures — it was just us few enjoying this gift from nature. 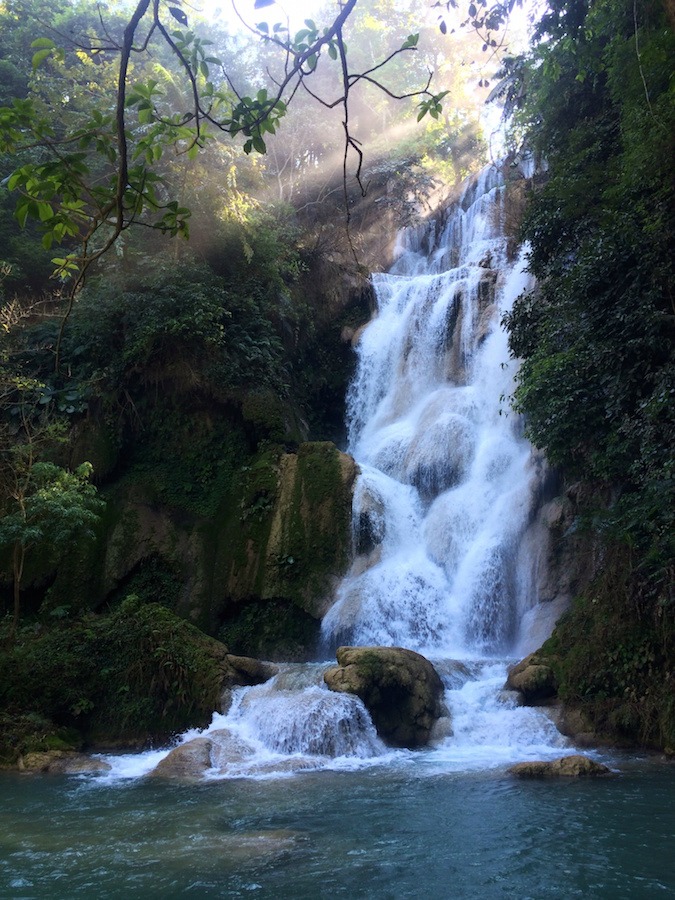 But the secret pool wasn’t entirely a secret. A handful of other intrepid backpackers were swimming around.

“No matter,” I thought. I needed to cool down after my long hike in the hot sun. After a long, hot day of hiking, the water, though cold, was refreshing, and after a few minutes my body warmed it up. The water was deep enough to swim around, and we played in the pool and went over to the edge, where we found a little shelf to sit on, look down, and spy on the tourists below, who didn’t seem aware of this special place right above them.

After playing for what seemed like minutes but was really hours, we made our way back with just enough time to eat at one of the stalls that line the road before our ride arrived. We feasted on BBQ chicken, sticky rice, and som tam (spicy papaya salad). The chicken was cooked to perfection, with the skin just the right amount of crispy, and the sticky rice soaked up the perfectly sweetened som tam.

Days later I returned with a new set of friends and showed them the not-so-secret pool before feasting on the chicken again. Kuang Si was just as amazing the second time.

Getting to Kunag Si is easy. Just pick up the tuk-tuks from the center of town in Luang Prabang. They depart anytime you want and cost around 30-40,000 kip. Make sure you plan your day to allow for at least four hours at the falls itself. The entrance fee is 20,000 kip ($2.50 USD). To get to the secret waterfall, follow the instructions above.

The chicken place doesn’t have a proper name, but as you exit the falls, it’s the third restaurant on your left with the fruit smoothie stall in front. The chicken costs 15,000 kip.