How To Spend Four Days In Prague

Prague is a destination that always seems to be in vogue. It’s been on the tourist map for a long time, and the crowds show no signs of abating.

Prague is a gorgeous, well-preserved medieval city coupled with a rich history, expansive parks, Vegas-style nightlife, and a hint of romance. The city holds a special place in my heart: it was the first city I backpacked through on my round-the-world trip in 2006. It was where I stayed at my first genuine hostel, the first place I was on my own, and the first place I went to where signs weren’t in English. I grew as a traveler here.

After many years away, I was happy to come back not once, but twice this year. A lot has changed — there are more tourists, prices are higher, the food is more international, and more foreigners live in the city. But the city’s essence — all the cliché stuff (cobblestone streets, quaint medieval houses, incredible charm) that makes Prague Prague — is still there, and I was happy to reconnect with the city.

After spending weeks roaming the city, today’s blog post puts the best Prague has to offer into a manageable four-day itinerary. If you are looking for a way to organize your trip, this itinerary, like previous ones I’ve put together, will help you do so.

Walking tours are a smart way to orient yourself to a new city, learn some history, and hear about the main attractions. There are a TON of free walking tours in Prague, so you’ll have plenty of options. All the tour companies meet near the astronomical clock in the Old Town Square at 10 a.m. and last about three hours. They will give you an overview of the main sites like the Old Town Square, Charles Bridge, Prague Castle, the Jewish Quarter, and more.

My favorite company is New Europe. They operate free tours around Europe and tend to have upbeat guides and lots of historically accurate information. 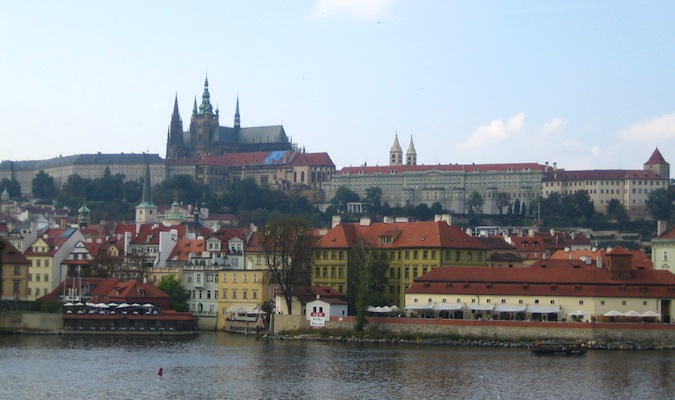 The famous Prague Castle is the next logical place to visit, since all the walking tours end near this popular sight. The castle, which lords over the city, consists of multiple sections: St. Vitus Cathedral, the Old Royal Palace, The Story of Prague Castle, St. George’s Basilica, Golden Lane with Daliborka Tower, the Powder Tower, and Rosenberg Palace. You can buy a ticket to any or all of these sights from the box office. The most famous structure is St. Vitus Cathedral — this is the large building you see when you look up at the castle from outside the city walls. 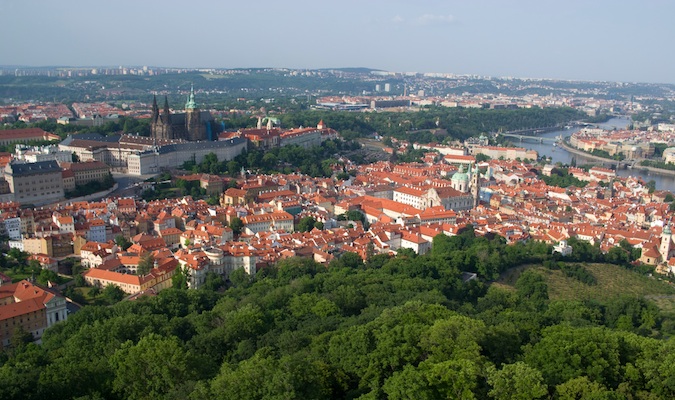 Pet?ín Park is the city’s biggest and most beautiful park, with sweeping views of Prague. You’ll find a garden, a maze, and a lookout tower that looks like the Eiffel Tower. What I love about this expansive park is how easy it is to get lost among the trees. Paths meander throughout, and it’s a relaxing contrast to the crowds of the historic center. Keep in mind that this park is on a big hill and walking to the top can be strenuous. There is a funicular that can take you down (and up) the hill if you don’t feel like making the trek. 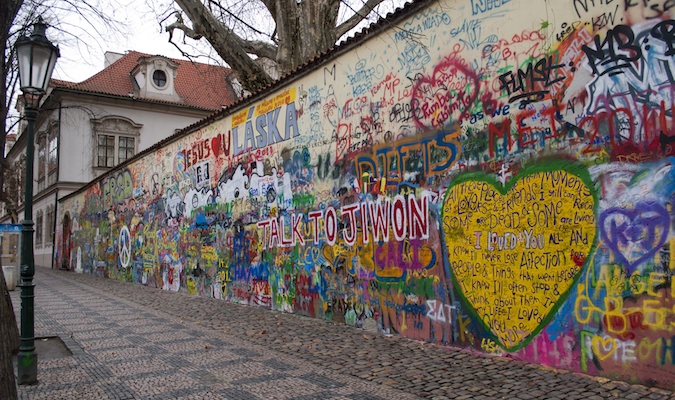 After Pet?ín Park, head down towards Kampa, a neighborhood by the river, and visit the John Lennon Wall. Toward the end of Communism in the 1980s, students started writing John Lennon lyrics on this wall as a way to air their grievances. Today, the wall represents love and peace. Tourists are allowed to write or paint on it too.

Relax on the waterfront

It’s been a long day, so relax in Kampa with a satiating drink, some food, or a coffee. There are a number of appealing restaurants and cafés in the area. To get here, just keep walking toward the river from the John Lennon Wall. You’ll cross a little bridge and there you are! You’ll find lots of places to eat, sit, and relax, and when you’re done you can walk across the famous Charles Bridge back toward the city center. 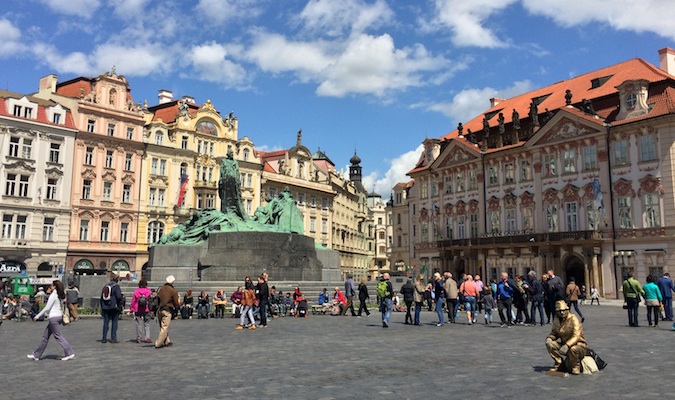 Though you got an overview of the Old Town Square during your walking tour, today you can savor the square’s attractions in detail. Some of the highlights include: 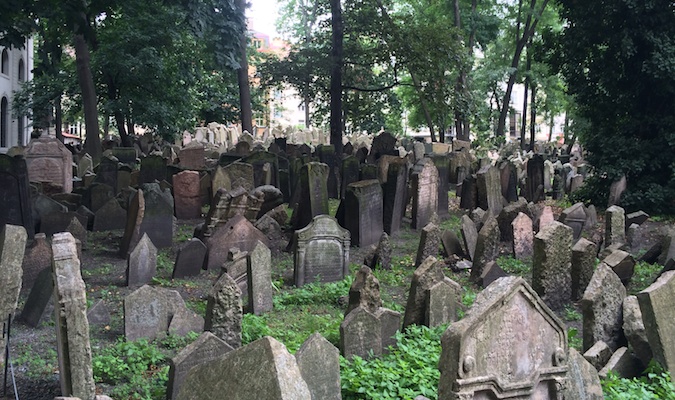 The historic Jewish Quarter is one of the most popular attractions in Prague. Hitler saved it from Nazi destruction because he wanted to make the area a museum to the lost Jewish race. Now, the museums, synagogues, and historic graveyard in the area honor the history of what was one of the largest Jewish communities in Europe. 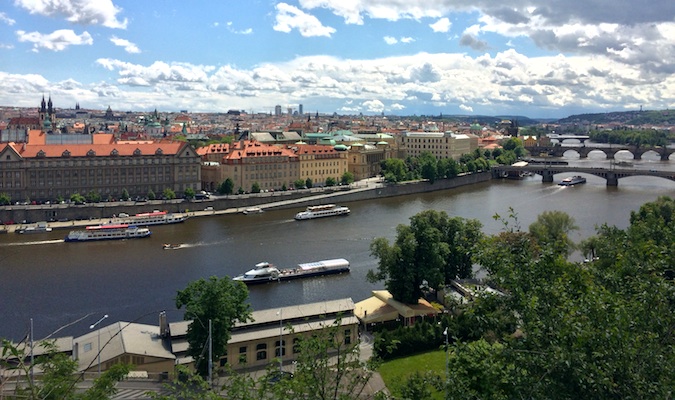 This park, across the river from the Jewish Quarter, features several walking trails, a café, and expansive views of the city. You’ll see a lot of art students painting the cityscape. Cross over to Chotkovy sady for beautiful gardens and rear views of the Prague Castle. It’s quiet, with secluded paths that make for an intimate romantic stroll.

Prague Underground Tours runs an underground tour of the medieval houses in the city center. There are many catacombs in Prague, and this tour, though short, provides detailed history about medieval Prague. 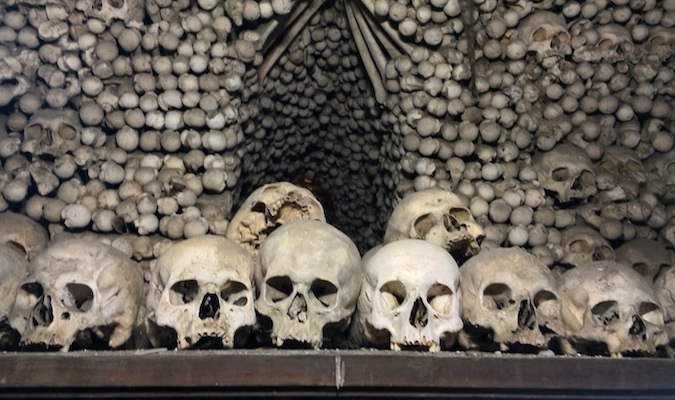 Kutná Hora was an important center for silver mining in medieval Bohemia. It helped keep the kings of Prague rich. Now the town is famous for its creepy bone church, Sedlec Ossuary, which contains 40,000-70,000 bones. Since the church takes only about 15 minutes to see, head into the historic city center to see some of Kutná Hora’s other attractions, including marvelous medieval churches, overlooks, well-preserved streets, and a large town square. It’s a small and quiet town that feels like Prague without the crowds. 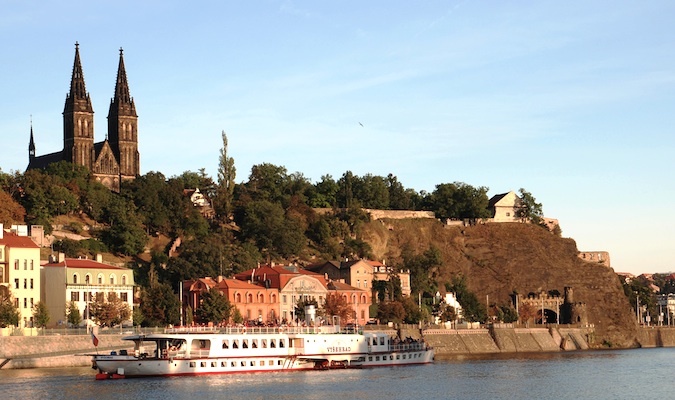 While Prague Castle gets all the love, Vyšehrad, located in the southern part of the city, was also one of the original castles of the kings of Prague. It was built around the 10th century and contains Prague’s oldest surviving building, the Rotunda of St Martin. Few tourists ever come here, so you’ll get the castle and its views of Prague to yourself. It also offers good upriver views of the city.

Walk up the river back into town

From the castle, you can take a nice walk along the river back into the center of town. There are walking and bikes paths as well as places to stop, sit, and maybe read a book. It’s mostly locals around here, despite it being about 20 minutes from the city center. 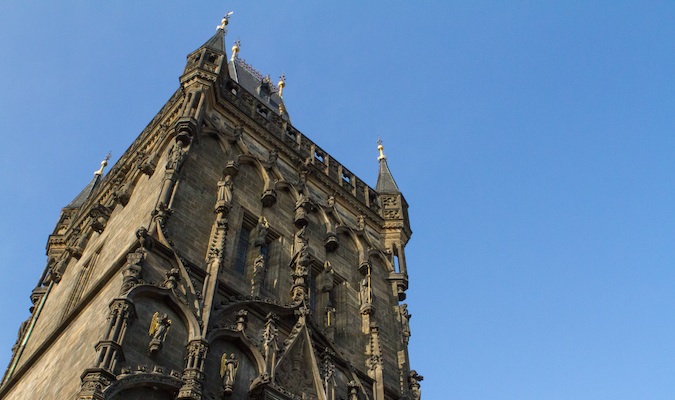 Back in town, be sure to check out this medieval tower, one of the original 13 city gates. Construction began in 1475 and, during the 17th century, the tower used to store gunpowder. It was heavily damaged in 1757 and most of the sculptures on it were replaced in 1876.

Wander the streets of Prague 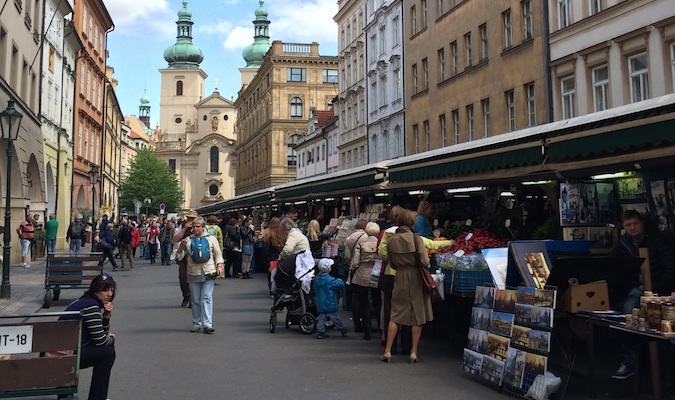 Prague is a stunning city. Meander its winding streets. Find random restaurants, markets, and churches. Sit and watch the people go by. Just get happily lost.

Prague has been one of my favorite cities in the world since I first visited in 2006. Though there is a constant mass of tourists, Prague’s magnificence will always make this touristy city one worth visiting. And hopefully this itinerary will help.